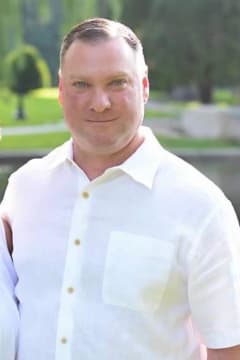 Michael Gary Fuller, 46, passed away on July 12, 2021. Mike was raised in Lynn, MA and is a 1992 graduate of St. Mary’s High School. He continued his education at St. Anselm College in NH where he met his future wife, Michelle (Cardillo) Fuller. In addition to Michelle, he is survived by his sons, Christopher and Jack of Rockland, his parents Gary and Kathleen Fuller of Lynn, his sister Karen Cormier and her husband, Steve, of Peabody, his in-laws Stephen and Geri Cardillo of Rockland, Marc and Darby Cardillo of Marshfield, four nieces, a nephew and several aunts and uncles.

After graduating St. Anselm in 1996, he worked in the insurance industry, most recently for CRICO as a Claims Team Manager. However, his true passion and calling was coaching. He started his hockey coaching career at his alma mater, St. Mary’s High School. His greatest joy, though, came in coaching his boys, Christopher in hockey and Jack in flag football. He was an ardent Boston sports fan, especially the Bruins, and also was an unlikely Florida Gators devotee.

Family and friends are welcomed to Magoun-Biggins Funeral Home, 135 Union Street, Rockland on Sunday July 18, 2021 4:00-7:00pm. A private memorial service will be held later by the family. In lieu of flowers, donations may be made in Michael’s memory to the American Diabetes Association, PO Box 7023, Merrifield, VA 22116 . 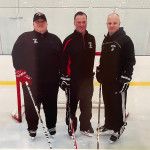 I've knew Mike for a little more than a year working with him on insurance claims as defense counsel. While we always talked shop, without exception everyone of conversions would gravitate back towards family. He was a true gentleman and I imagine a great father, son and husband. My deepest and sincerest condolences for your loss. Lawrence Rosenblatt
- Lawrence Rosenblatt
Kathy, Gary and Family, We are so sad to hear this news. You are in our thoughts and prayers. We pray that you find comfort and peace in your loving memories of Mike. Jim and Judy Gangi
- Judy Gangi
Our prayers, love and sympathy to Michelle, Jack and Christopher, Mike's Parents, Sister & In-laws. Love to all, MaryBeth and John Muldowney and Family
- MaryBeth Muldowney

Michelle, Chris, Jack and Family my deepest condolences. Mike and I were roommates and friends in college. Many of my fondest memories involved sitting on the porch with your Dad after class on Friday afternoons shooting the breeze and celebrating life. Mike was a great friend and true Gentleman. Steve Priftakis
- Stephen Priftakis
I got to know Mike through working with him at Lexington Insurance. He was a joy to be around, and Ivan still see his smile and hear his laughter. My deepest condolences.
- Rich Kenney
I guess as with others I am speechless and saddened to hear of this heart breaking news. Kathy, please know my thoughts and sympathy are with you and your family. Hugs and love, Holly Pace
- Holly Pace
Gary, Kathy, Jack, Christopher and Michelle, I had the opportunity to get to know Mike over the years and he was a great man, and an incredibly loyal friend. He was one of the first people to come visit me after my kids were born and to offer me advice as a first-time father to my three newborns. He was always talking about Jack and Christopher and was extremely proud and supportive of all their accomplishments. Mike always knew what to say to get the best out of me both personally and professionally and I will be forever grateful for having the opportunity to call him a friend. I will miss him dearly and am thinking about all of you in this difficult time. - Joe Delisi
- Joe Delisi

All of us who had the privilege to know and work with Mike were blessed by his friendship and generous heart. We carry him forward in all of our acts of kindness. My deepest sympathy to his family who he loved so much. Beth Cushing
- Beth Cushing

Sending my deepest condolences and sympathy to Michael's family. I worked with his mom for several years and remember Michael coming into the office to visit his mom. Keeping you in my thoughts and heart during this very difficult time. Tracy Karavias
- Tracy Karavias
Kathy and Gary and family - I am sorry for your loss. Please know you are in my thoughts and prayers.
- Sandy Chouinard Hurd
Michelle, Christopher, Jack and family, please accept my deepest condolences. It was always a treat to work with Mike, and get to share in his humor and enthusiasm.
- Alison Anderson
My condolences and prayers to family.. KarlaParnell
- KarlaParnell
Michelle, Christopher and Jack: I want to share my condolences on your loss. I had the privilege of getting to know Mike through our work together for Crico. He was kind, funny, smart, and always able to keep life in perspective in such a positive way. I know that you are feeling this loss terribly, but I hope that his memory will be a blessing to each of you and to all who knew and loved him.
- Ellen Cohen

Michelle, Christopher and Jack... Please accept our sympathy for your loss.. In time, let your memories of Mike bring you comfort.
- Helene & Tom O'Connor
Just want to send our condolences to the whole family! So sorry ...big hugs The McDonough Family
- Melissa mcdonough

To Kathy, Gary, Karen, and Mike's beautiful wife and children, I was so shocked and saddened to see Mike's obituary. I have such wonderful memories of Lexington Terrace and that year (1974) of babies born there (5). And the wonderful friendship Kathy, I and our children developed. Sean and Michael were part of that group of babies. Mike was that little tow headed cutie. I cannot believe that he is gone. I am so, so sorry for your loss. Love to you all, Cathi, Bill, and family. XOXO
- Cathi & Bill Deveney

Michelle, Christopher, Jack -- you are in my thoughts and I am so sorry for your loss. -- Noel
- Noel Black

Dear Michelle, Christopher, Jack and family. Sorry for the loss of your husband and Father. Mike was a great guy and will be missed by many. Your family is in my thoughts and prayers. Scott Griffiths
- Scott Griffiths

Dear Michelle, Christopher, Jack and family. No words could adequately capture how deeply saddened we are to learn of Mike's passing. As a work colleague and friend, Mike was someone who always spoke with kindness and I will remember him best for the positive light in which he saw the world. He will truly be missed. We will be keeping you all in our thoughts and prayers. ~Calista & Tim Hlavac
- Calista Maharaj
As a colleague of Mike's - I so enjoyed our interactions over the years. He was a lovely guy, always super friendly and helpful. I have a special memory of he and Jack contributing to our CRICO Cares effort to create "Welcome Home" Kits for Veterans transitioning back to independent housing. Please accept my deepest sympathies and comfort to all who loved him. - Missy Padoll
- Missy Padoll

I worked with Mike and will miss him. He always brightened my day. I'm so sorry for your loss. -Jen Rose
- Jennifer Rose
Dear Michelle, Christopher, Jack and family. I became friends with Mike through legal work I did for him at CRICO. He was always such a kind and supportive person. He was fiercely loyal and incredibly supportive. He had a wonderful, gentle way about him. I loved hearing about his coaching and he loved talking about his sons. I will miss him very much and am grateful to have known him. I know he is irreplaceable but I wish you healing in time and comfort in loving memories of him. Sincerely, Brent Tingle
- Brent Tingle
Michelle, Jack, and Christopher, I am completely heartbroken of the loss of your husband and Dad. Always, so sweet eveytime we would see him at the school events and such. Wanted to let you know how much we are thinking of you and your beautiful family. Praying for all of you. Yours, Amy, Sinisa, Max, and Luka Prostran
- Amy Prostran
Michelle, Christopher and Jack you are in my prayers and thoughts. I worked with Mike at CRICO and he would always find a way to bring a smile to someone's face. He was always willing to help me in any way possible. He will truly be missed. Shalea
- Shalea

I worked with Mike at CRICO and am so sad about his passing. I was so impressed during COVID that he took up cycling and did the ride for Wounded Warriors. He was also so concerned for others and less so for himself. My heart goes out to his family and the friends that knew him better than I did.
- Carla Ford
Michelle, Christopher, Jack and family, We are so terribly sorry for your loss. Mike was a great man and a great friend to all of us who worked with him. He will be sorely missed. We are keeping you in our thoughts and prayers. -Carl & Kristen Kallenberg
- Carl Kallenberg