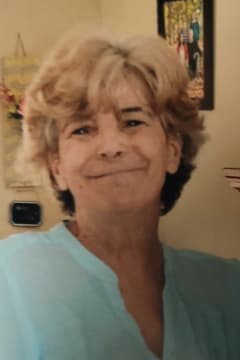 Maureen (Manning) Stacy of Easton, MA passed peacefully at home on December 26, 2021. She is survived by her devoted husband of 50 years, John (Jack) Stacy of Easton; daughters Kim Stacy of Swanzey, NH; Michele Achenbach and her husband Steven of Rockland, MA; and her son Mathew Stacy and his wife Jennifer of Easton, MA. Maureen leaves five grandchildren: Landen, Alexandra, Zachary, Hunter, and Freyja. Maureen is also survived by her mother, Stella Manning; brothers Charles, David, and Kenneth; and her sister Sharon Kendall. She was predeceased by her sister, Elaine Manning.

Maureen was born in Somerville in 1953. She often shared fond memories of her childhood growing up in Allston. In 1971, Maureen met her soulmate, Jack. They married and moved to Derry, NH, where they started their family. In 1976 they moved to Rockland, MA, where they spent the next 40+ years of their lives raising their children and welcoming their grandchildren into the world. In 2017, Maureen and Jack moved to Easton, MA.

Maureen was a devoted wife and mother. She was a nurturing person. You could tell her anything - she would be there to offer you support, but would also give you the hard truth you may have needed to hear. During challenging times she leapt into action to help see things through and, if needed, would be a fierce advocate for those she loved. Maureen was always your biggest fan. Anytime someone in her life was working toward a big goal, she was there to offer support, cheering you on the whole way. If something was important to you, it was important to her.

Maureen was very creative and talented, running craft groups during the years she and Jack were raising their family. Whether fixing something as complex as a wedding dress, or making a prom dress from scratch, she had a gift when it came to sewing. She was always willing to sit with you and teach you what she knew. Maureen was also incredibly fun with a passion for travel. She and Jack enjoyed exploring new places and trying new foods and experiences, but when she loved something, it became her thing. We’ll always think of Maureen when it comes to Salada tea, Lifetime movies, Florida, and nutcrackers.

Nothing in the world made Maureen happier than children, and this passion in their development and nurturing led her to open her own daycare in the late 1980s. Over those years, she completed courses in a range of topics focused on child development. She was proud to offer a home daycare that was ahead of its time in terms of curriculum and program - she challenged the children to ask questions and explore to find the answers, prioritized their swimming lessons, and gave them the tools to tap into their creativity. Most of her children stayed for years and became her extended family.

When Maureen’s oldest grandchild was born in 1993, she stepped into one of her favorite roles - nana. Over the years, every one of Maureen’s grandchildren knew that they ran the Stacy house, a place full of laughter, little paint fingerprints, and tiny puddles from little munchkins coming in and out from the pool. She had a knack for building bonds with her children and grandchildren through shared love of interests. She eagerly taught her granddaughter how to knit. When her grandson shared that he was going to become the owner of a yoga studio, she learned about the postures and watched his online classes. She learned how to play card games like Pokemon and Magic, and video games like Animal Crossing, just so she could play with her grandchildren.

Anytime her grandchildren needed her for more than fun, she was there, offering comfort and support in whatever form was needed. She always said “Grandchildren are always welcome” - and proudly displayed a sign made for her with those words. Spending lots of time with them was her priority. On any given weekend you would find grandkids sleeping over, huddled on the couch with nana and papa, watching movies and filling up on treats. Whenever one of her own children commented about the grandchildren getting spoiled, Maureen would respond, “You can’t spoil children, you can only spoil eggs,” a phrase the children loved to repeat to their parents. Maureen’s capacity for sharing love was boundless.

Due to COVID concerns, the family will be holding a private ceremony to honor Maureen’s life followed by her burial at Holy Family Cemetery, Rockland MA. The family is planning to hold a Celebration of Life Memorial in the coming months. In lieu of flowers, please consider a donation to the American Lung Association in Maureen’s name.