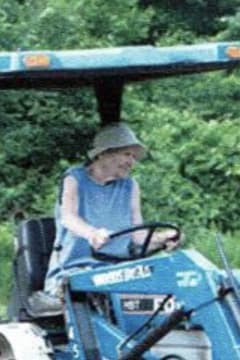 Louise M. (Wright) McCarthy of Rockland died peacefully at age 100 on December 22, 2021 at Harbor House in Hingham. Louise was born on March 17, 1921 in Lynn. She is survived by her daughters Kathleen Looney of Centerville; Maureen Heard of Groton; Patricia Knapp and her husband Andreas of Groton; Eileen Kendall of West Boylston and daughter-in-law Marilyn Brennan of Rockland. She leaves seven grandchildren and nine great-grandchildren. She was predeceased by her husband of 58 years, Andrew L. McCarthy, her son Andrew L. McCarthy Jr., her sister Harriette Young and brother Lawrence Wright.

Her father died when Louise was just seven years old. Louise graduated from high school, the first of her family to do so. Over the years she held many jobs outside the home; she was proudest of her employment at Spaulding Graphics in Canton, where she worked as a valued employee into her late eighties.

In 1952, Louise and her husband purchased a farm in Rockland. With two young children the family lived in a house with no electricity, telephone service, running water, indoor plumbing, or central heating. After a few years they had three more children. All of her children worked on the farm growing up and continued to assist her throughout her life.

In the 1950s Louise began selling eggs, vegetables and fresh poultry locally. All of her daughters helped on the egg route while growing up. When Louise was given a baby pig to raise she discovered that animal husbandry was her life’s work. Soon she started raising more pigs, sheep, two cows and chickens. The farm became known as Luand Farm (after Louise and Andrew). Buyers came from all over New England for her piglets and lambs.

In the late 90s Louise began to scale back on raising animals. Louise was “the egg lady” and her daughter Kathleen started a flower and plant business. With Louise driving her tractor and rototilling they cleared fields, planted, and weeded. By 1995, they sold eggs and cut flowers at markets in Hingham, Cohasset, and Plymouth, but also at Louise’s door and at roadside. At one point she had over 200 hens and often donated surplus eggs to the Rockland Food Pantry. Louise was the subject of at least 2 news articles in the Patriot Ledger, and mentioned in an article in South Shore Living (May 2011).

In 2018, Louise became a resident at All-American Assisted Living in Hanson, where she lived until her recent hospitalization.

A graveside service will be held in the spring. We will miss her beyond measure.