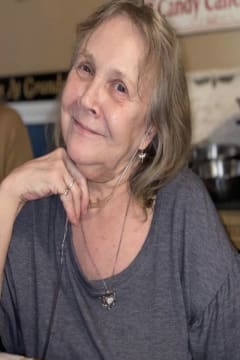 Jo Ann Frazier, of Plympton passed away peacefully at home with family present on June 15th,2021. She was born in Brockton in 1949, raised in Hanson alongside 6 siblings, including a twin sister. A twin sister she had a close bond with until her departing day. She was the proud daughter of the late Joseph and Ruth Grover.
After a terrible bicycle accident as a child, she was left in a coma and suffered brain damage. Despite the damage she was an extremely intellectual person. She had amazing compassion in her heart, and it showed in the way she cared for others, especially loved ones. She spent some of her teenage years as a candy striper at the Plymouth County Hospital, which planted a seed, as she would later begin a career as a CNA for the very same hospital.
JoAnn was a devoted mother and a dedicated grandmother. She often joked, saying her grandchildren were the reason she had children. She enjoyed crafting and crocheting, making, “projects,” for her loved ones to cherish through the years. She loved her traditions and spending time with her family and friends. “Grammy,” to most who knew her, she was quick with a joke, always a good listener, and loved her Red Sox.
JoAnn is survived by her children, Michele Morss of Rockland, Melanie Cosato and her husband Tom Cosato of Plympton, and Jacqueline White and her husband James White of Taunton. JoAnn leaves behind 10 grandchildren and 4 great grandchildren. Survived also by her siblings Sue Stevens of Vallejo, CA, Meredith Weiss of Halifax, Peter Grover of Kingston, and her twin Ruth Ann Tremblett of Halifax. She is predeceased by her husband William Frazier, as well as her son Michael Dion, and sisters Nancy Campbell and Sally Holland.
Friends and Relatives are invited to attend visiting hours on Monday, June 21st from 5pm to 8pm. A memorial service will be held at 10 am Tuesday the 22nd, all are welcome to attend.

It has been a little over 2weeks that you had a memorial service. Your friend Mark gave service, Shelby told a wonderful story of you. I was lucky enough to come in to our life together, shared sooo many beautiful memories. I was lucky enough to be able to come come over and spend time with you. We've laughed, cried, fought, spent births weddings party's alone time Tart times. You have a wonderful family that I feel fortunate to be close to. There's so much I could say, you were born first, you alw add us said that it was because you showed me the way! When it's my time I will be looking for you to show me again . I love you Bobo , life will go on but it will never be the same. Thankyou for being my 6 minutes over sister .
- Ruth Ann Tremblett
Joann was a faithful helper at the chowder luncheons and other fund raisers at the Halifax Congregational Church. I remember well how she would peel potatoes together with other church members. She was always congenial and helped in many ways with never a complaint. She will be sorely missed. Carol Lang
- Carol Lang

To JoAnn's FAMILY AND FRIENDS WHO WE KNOW AND LOVE OUR DEEPEST SYMPATHY. We hope this poem helps threw these sad and difficult times. Here is a poem that has helped me many times, I hope it will help to ease your sadness She Is Gone You can shed tears that she is gone, * Or you can smile because she Lived You can close your eyes and pray that she will come back, * Or you can open your eyes see all that she has left Your heart can be empty because you can't see her * Or you can be full of the love that you shared. You can turn your back on tomorrow and live yesterday, * Or you can be happy for tomorrow because of Yesterday. You can remember her and only that she is gone, * Or you can cherish her memory and let it live on. You can cry and close your mind, be empty and turn your back, Or you can do what she would want: Smile, Open your eyes, Love and go on. We will see you again my Friend and Tart Sister. And I'm sure you will be riding in a white pick-up truck singing Barry White songs. with Much Love Karen and Dave Tremblett
- Karen Tremblett