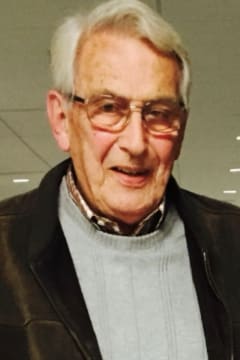 George Rushlow White of Rockland, Massachusetts died on May 20, 2022, surrounded by his loving family.  George was born on November 16, 1934, in Burlington, Vermont to Horace Tudor and Rose Rushlow White. He grew up on George Street in Rockland and moved to Exchange Street in 1963 where he raised his family in his beloved hometown.

George graduated from Rockland High School in 1952. While in high school he participated in various sports, boy scouts, and worked at several jobs including the original Tedeschi’s supermarket.  One of his goals for graduation was to “make a million dollars a minute and retire after the first hour”

He was a 1957 graduate of Northeastern University.  After college he enlisted in the US Army National Guard, where he served for 5 years rising to the rank of Sergeant.

In 1955 George met Sheila Kelly. They married in 1957 and this was the beginning of a 64-year romance filled with unconditional love, laughter and unwavering devotion to each other.

That same year, George started his nearly 34-year career at the John Hancock Insurance company.  At the height of his career, he traveled frequently all over the United States and received multiple awards for his performance.  George was a true professional in every sense of the word, and he rose through the ranks of one of nation’s most prestigious insurance companies, eventually becoming National Sales Director.  As a member of the Society of Financial Service Professionals he achieved several licenses including his CLU.

George served on several civic organizations including the Rockland PM Club, the Rockland High Boosters, and the Rockland Jaycees for which he was often seen volunteering at the annual Rockland Carnival and the annual Christmas Tree sale.  Later in life George and Sheila were regular supporters of the Rockland Food Pantry.

Perhaps no volunteer activity gave him so much enjoyment and provided so much lasting impact than his participation in Rockland Youth Hockey.  As Rockland Youth Hockey Board of Directors member, and more importantly as a coach of several teams over many years, his contribution to the youth of Rockland in the late 1960s and1970s filled him with pride. Although one of his sons were usually part of his teams, he considered all his players extensions of his family.  More than 40 years later he could probably recite each roster from memory.  Even after coaching, he was a fixture in the stands at many high school hockey games.  With that signature booming voice, at just the right moment, he would remind all of us to “Play Hockey!”

George and Sheila always made time for family vacations and memories.  For almost sixty years the house on Exchange Street was filled with family, food, and laughter during every holiday.  No matter if it was cookouts around the pool, Saturday movie nights at the Kingston Drive-In, short trips to Bensons Animal Farm, annual 2-week trips to Florida, or extended summer vacations to the legendary White Lake Campground in NH, George and Sheila always made time to make memories with family.   Later in life George and Sheila enjoyed traveling to Palm Springs, visits to Missouri, and the trip of a lifetime to Alaska, a trip that he talked about often.

Starting in the late 90s, George and Sheila owned a couple of RVs. He greatly enjoyed his RV trips with Sheila.  They would travel together around the Northeast and Canada and would regularly camp together with family and friends (old and new) at several campgrounds including Moody Beach, Searsport, Rochester, and Acadia National Park.  No trip to Acadia was complete without a view from Cadillac Mountain.  At home, George enjoyed tending to his garden, cooking, taking care of his yard and pool, and sitting with Sheila on the front porch.

For all his accomplishments and interests his greatest loves were his wife, his 5 children, 13 grandchildren, and 6 great grandchildren.  To say he was a devoted, unselfish, and loving family man is a dramatic understatement.

Together George and Sheila attended nearly every event that their children, grandchildren and great grandchildren were involved in.  For more than 60 years it was a rare dance, sports, music, school event, graduation, art show, wedding, birth, christening, communion, that they missed, if at all.  His presence was a constant comfort, and his pride, love and support for his family was as steady and reliable as the tides.

No matter what the event, birthday, or accomplishment a card, a newspaper clipping, and/or a check would arrive with his distinctive handwriting and a note of support, love, pride, and encouragement.  He would remember every occasion large or small and would often text words of encouragement for a big meeting, test, or appointment.  Even very late in life he was still an active participant in family home improvement projects, tax preparation, life advice, holiday dinners, and was an all-around great listener.

Humble to his last breath, George was an exceptional human being.  He was truly the best Husband, Father, Grandfather, Great Grandfather, Son, Son-n-law, Uncle, Brother, and friend.

We will miss him terribly.

Relatives and friends are respectfully invited to attend the visiting hours on Tuesday May 31 from 4-6:30 pm, followed immediately by a Prayer Service from 6:30-7:30pm at the Magoun-Biggins Funeral Home at 135 Union Street Rockland MA 02370.