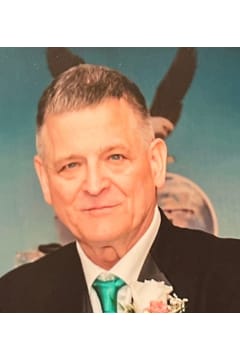 David Griffith, 77, passed away peacefully at the South Shore Hospital on February 14th, 2021 as he went to be with the Lord.
David was born in Cincinnati, Ohio to Garland Griffith and Florence Schaaf on July 16th, 1943. He was one of 7 siblings.

Upon High school graduation, David enlisted in the Navy and served as a SeaBee for twenty years. David took three tours back to Vietnam and later settled in New England for the rest of his living days, working in the welding profession he learned in the Navy. In his late years, David also passionately taught archery to people of all ages.

David was a devoted member of Holy Family Church where he spent all his Sunday mornings for many years. He also enjoyed cracking jokes to the family, making his famous chocolate pizza, teaching the new tricks he learned on his electronic of choice and telling the family to go with the flow. He had a generous heart and always did his best to help others.

A public wake honoring David's life will be held on Saturday, February 20th from 10am - 12pm at the Magoun-Biggins Funeral Home, 135 Union St., Rockland, MA.

Funeral mass and burial will be reserved private for family only.

If desired, Flowers can be sent directly to Magoun-Biggins Funeral Home in Rockland, Ma.

To Dave's family , As long time "Holy Family friends" of Dave, please accept our deepest sympathies. We travelled with Dave through many personal experiences and love seeing his spirituality flourish. Dave was a very remarkable man committed to his family, friends and neighbors. His quick wit will definitely be missed. I know and am sure you know as well, that Dave is at peace. With him, he took all his good works and I am hopeful that God is rewarding him for that. I pray that you find peace and comfort on the days ahead recalling fond and loving memories, especially in these tough times.
- Bob & Sue Coughlin
To the family of David Griffith. We were sorry to hear Od t

Love and healing prayers to the family of David. He and Anne were wonderful neighbors for many years. May he Rest In Peace.
- Cathy Travers
To Dave's Family, I know Dave from Holy Family Church. It was always such a pleasure speaking with him. He is definitely a man of God and I pray he is now meeting God face to face. May your memories sustain you in the difficult days and weeks to come. God bless.
- Kathleen Kawa
Stacey, Michelle, David..Please know we are thinking of you at this sad time.Your Dad is RIP.
- Steven & Daphne Izer
Sending sincere condolences to Dave's family. May he Rest In Peace.
- Theresa Fulford
To Dave's Family. I knew Dave from the Weymouth Sportsmen's Club where he taught archery. He was a kind and generous man whom I feel lucky to have gotten to know over the past year. I was heartbroken to learn of his passing. My prayers are with you all.
- Doug Gaff
So sorry to hear; my condolences to all family.
- Louise Ricciardi
David, Michelle and Stacy - I'm so sorry for your loss. Your dad is somebody I will forever remember as somebody who loved a good joke and always made me smile. My thoughts are with the three of you.
- Kim Phelps Nelson