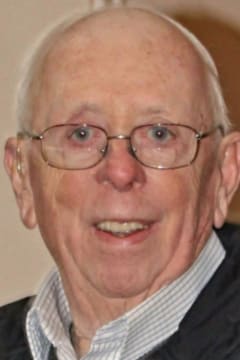 Charles was a great grandfather of 9, Brady and Ryleigh Glover, Charlie, Joey, Kolly Ferrara – all of Whitman, Milo and Oscar Littwin of VT, Leo Grogan of NC and William Bell.
Charles was born in Boston to the late Charles and Nora (White) Bell of Ireland. He graduated from Boston Trade School and subsequently served in the U.S. Navy during the Korean War. Charles was the proud owner of Charles G. Bell, Jr. Office Furniture for 44 years in South Boston. Charles and Mary were long-term communicants at St. Helen’s Church in Norwell. One of their favorite and most frequent activities was their afternoon drives to watch the boats and other activity around Scituate Harbor. Charles was an avid striped bass fisherman, and enjoyed trips to Ireland and watching the N.E. Patriots and the Boston Red Sox.

Family and friends are welcomed to Magoun-Biggins Funeral Home at 135 Union St., Rockland on Wednesday, June 16, 2021 from 4-7PM. A Funeral Mass will be celebrated at St. Helen’s Church at 383 Washington St., Norwell on Thursday, June 17 at 10 AM. Burial will follow the Funeral Mass at Holy Family Cemetery at 92 Centre Ave, Rockland, MA. In lieu of flowers, donations may be made to Hospice of the South Shore. Please go to https://southshorehealth.org/donate and select “Hospice of the South Shore”.

The Bell Family is eternally grateful to the doctors, nurses and home health-aids who provided care and support to Charles and his family through the last year.
For 56 years of marriage, Charles absolutely adored his wife Mary. After dinner, it was not uncommon for him to compliment her by proclaiming “Another prize-winning recipe!” His greatest source of pride was his family, and for that reason repeatedly referred to himself as the “Luckiest Man in America”. Charles was loved by his family and friends and will be forever missed.

Kathy and Mrs. Bell, I was so sorry to hear about your loss. Sending prayers. Tina Volpe Hitchcock
- Tina Volpe

Dear Bell Family, I was so sorry to read of Mr. Bell's passing. He was always such a friendly neighbor. Sending many prayers for comfort to all of you. May God rest his soul and give you peace. Fondly, Kathy Botelho Kawa
- Kathy Botelho Kawa