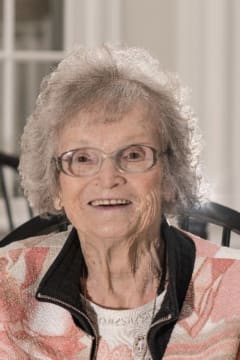 Alice W. (Ryan) Korzeniowski, 93, died peacefully on June 30, 2021 at Queen Anne Nursing Home in Hingham after living in Rockland for 60 years. Born in Boston to William A. Ryan and Alice (McManamy) Ryan, she was raised primarily in South Boston.

Alice graduated from Dorchester High School and worked in the Boston Navy Yard during World War II. She was a recipient of the Rosie the Riveter certificate.

Decades later Alice matriculated to Stonehill College where she earned a Bachelors’ Degree and then to Northeastern University where she earned a Masters’ Degree. She worked as a Social Worker for Catholic Charities and subsequently the Commonwealth of Massachusetts Department of Social Services where she was a zealous advocate for abused and at risk children.

A devout Catholic, Alice exemplified unconditional maternal love. She rejoiced in her large family and was a fount of affection, devotion, and inspiration for her progeny. She cherished summers spent camping at Bourne Scenic Park and her retirement years in Florida in the company of her husband of 66 years and best friend, Charles “Charlie” J. Korzeniowski, Sr., until he passed in 2014.

Alice loved to travel and visited many foreign lands. She enjoyed playing cards with family, especially on holidays, and was known to take trips, both domestic and abroad, to participate in games of chance.
She was a devoted viewer of the Catholic Channel. However, friends and family knew better than to try and reach her by phone during Jeopardy or Wheel of Fortune.

All services will be private.

I enjoyed the times that I spent together with Alice when I would bring her communion she was such a joy to be with and a very spiritual and loving lady God bless you all Linda Mahoney
- Linda Mahoney
Janet and Francie, I'm sorry for your loss. Cherish all of your memories of your mom.
- Susan McGrath Ryan

Janet, You and your family are my thoughts. Hugs, Henri
- Henri Menco
Bill and family, I am sorry for your loss. May you find peace in your memories.
- Pat Runci

Fran/family..losing a mom is not easy but you will never forget all the beautiful memories to share with family..she is now resting in peace after raising her large family..sending prayers your way, God Bless Doris Burns and family
- Doris Burns

I loved and had the honor of knowing Alice for most of my life. I will miss her but know she is now with Charlie and Chuckie and in Haven love Gail
- Gail Thibeau

Words can't express how sorry I am , growing up I spent so much time at her house on North Ave, Alice always knew what to say, she was a amazing woman. Sending prayers and hugs to the family. 🙏
- Lynda Totte

Dear Fran, So sorry for your loss. May your memories comfort you.
- Denise Rioux