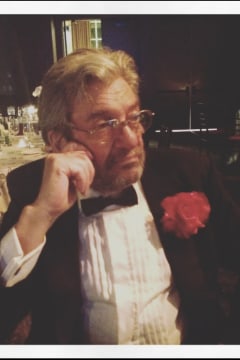 Alberto Cesar Delloca passed away at age 76 on Monday, October 10, 2022, lovingly holding hands with his wife, Alicia Wanda Pawlowski, and their only daughter, Janina Delloca-Pawlowski.

He was born on February 7, 1946 along with his twin sister, Teresita Noemi Delloca, in Buenos Aires, Argentina, to his father Dr. Alberto Jenofonte Delloca who was an Orthodontist Dentist and his mother Josefa Catalina Pafumi who was a wonderful pianist. He graduated from The University of Buenos Aires and has his Masters Degree in Accounting and Marketing. He was an Accounting Professor at The Catholic University of Buenos Aires for several years where he was revered by his students. He was the Chief Financial Officer at an aluminum company in Buenos Aires until the mid-1980s when due to the Argentine economy he moved to the Unites States to seek a better future with his wife and daughter. He worked as an Accountant with a particular passion for Forensic Accounting.

In his spare time he proudly celebrated his Argentine patriotism. He was the Founder of the The Argentine Association of New England in 1990. Throughout the years his commitment to the Argentine community continued to grow and he represented Argentina at Boston’s annual International Festival, he worked closely with the Argentine consulate in New York to bring necessary services and events to Boston, partnered with the Latin American Consuls for the Annual Ibero-American Film Festival showcasing cultural films and welcomed various diplomats to Boston. He was a great admirer of former Argentine President Domingo Faustino Sarmiento for his passion for education, was the Founder of the Sarmiento Institute of Boston and he was featured in the documentary on Sarmiento’s life linked here.

He was also a Founding Member of the Amigos de La Fragata Libertad supporting the Argentine Tall Ship and enjoyed a private voyage aboard along with many receptions aboard in both Boston and Buenos Aires. He was a very proud Mason of the Grand Lodge of Masons in Massachusetts Logia America in Cambridge where he held various positions throughout the years including Secretary, Treasurer, Senior Warden, Lodge Ambassador, Masonic Home Representative, Trustee and Worshipful Master. People trusted him for advice. He did things following his heart not to receive recognition and was always willing to help selflessly.

He was a reserved and unassuming man yet he orchestrated an intricate plan to meet his wife Alicia after he saw her take the professor’s desk during their first year of college. It’s undeniable that they have been best friends for 57 years and were always scheming a fun real estate project together. Next April 27, they would have celebrated their 50th wedding anniversary.

Despite all of his accolades, the thing he seemed most proud of were his grandchildren William Alberto Cunningham (Age 4) and Catalina Alicia Cunningham (Age 3) who lovingly called him Ito, short for Abuelito. When he was a young boy, his own maternal Sicilian grandfather referred to him as “como Mejico no hay dos” meaning that even at a young age it was clear that he was truly one of a kind.

He loved his dogs, especially his current dog Oliver. He skillfully lit the charcoal grill for the weekend asados with just one match. He had a sweet tooth and enjoyed ice cream at any hour, anything with Dulce de Leche, and he loved Sprite and Ginger Ale so much it’s now referred to it as “Ito’s water.”

The family invites friends to join them celebrate Alberto’s life on Friday, October 14, from 5:00 - 8:00 p.m. at the Biggins Funeral Home. There will be a Mass on Saturday, October 15, at 10:00 a.m. at St. Paul’s Catholic Church in Hingham followed by a gathering at his daughter and son-in-law’s home at 768 Main Street, Hingham. Burial will at Our lady of Częstochowa Shrine Cemetery in Doylestown, Pennsylvania.