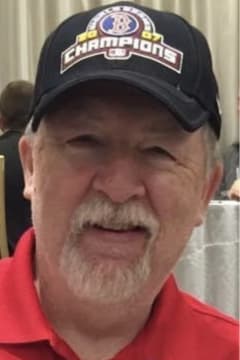 Stephen Gregory Bono, Sr. entered Heaven on Friday, June 24th, 2022 at the age of 67 after a brief battle with lymphoma.

Steve was the adored husband of Maureen Ann (Partridge), beloved father of Stephen G. Bono, Jr. (Cathleen) of Franklin, MA and Christine M. Bono of Cincinnati, OH; grandfather of and best friend to Gregory W. Bono of Franklin, MA; and loving brother of Catherine Rawley (Dennis) and Mark G. Bono (Elaine). Steve was predeceased by his parents, Frank G. and Lorraine C. Bono. He is also survived by many cousins, brothers - and sisters- in-law, several nieces and nephews, and countless friends.

Steve grew up in Rockland, MA and graduated from Rockland High School with the Class of 1972. After graduation, he worked as a woodworker at the E. Norris Brown Company, finishing as a foreman at the R.R. Scheibe Company.
His motto was, "You always use the right tool for the job," and chances were he had it.

Steve's favorite thing in life was his family - he loved being Maureen's "Lovie," Steve and Christine's Dad, Cathleen's Father-in-Law, and most of all, "Peepaw" to his grandson Greg. Peepaw and Greg spent many hours discussing players, trades, and playoff chances of just about any team and sport. They often traded trivia questions via text trying to stump each other, and played countless hours of video games.

Steve became a basketball official in 1986 and joined the International Association Approved Basketball Officials (IAABO) Board 54, where he served as Vice-President & 2nd Vice-President as well as a member of the executive board for many years.

Steve went on to hold positions on the boards of various other referee associations. He was a founding member as well as president of the Eastern Massachusetts Basketball Official's Association. He also was a referee, assistant coach and past president of the Whitman Junior Pro Basketball League, a referee for the South Shore Youth Basketball League and was an official for more than 25 years for the NCAA Division III.

Another favorite pastime of Steve's was umpiring for the Eastern Massachusetts High School Softball Umpire's Association. He had been enjoying that for the past 9 years.

After retiring, Steve ran an online sports memorabilia and trading card business. He truly enjoyed assisting people who were in search of a specific, hard to find sports item. He loved the Boston sports teams. Whether at their best or at their worst, he always had faith in them. He could often be heard doing his "armchair quarterbacking".

Steve enjoyed his golf outings and occasional golf weekends in Cooperstown, NY and Poland Springs, ME, with his brother and "the guys".

Steve's other main group of fun friends were affectionately known as "The PZ's." Many hours and weekend getaways were spent over the years with this group of guys who were mainly composed of basketball officials, coaches, and fans enjoying each other's company and sharing tales about life on and off the court.

Steve loved riding his Harley, whether it was a trip to Damien's, a road trip to NC, or a ride with Maureen.

Steve will be remembered for his endless sports knowledge, quick wit, enjoyment of a good joke or limerick, uncanny ability to recognize faces, and his loyalty to his family and friends.

In lieu of flowers, the family respectfully requests that you consider making a donation to the Lymphoma and Leukemia Society of America.

Steve’s family invites friends and loved ones to celebrate his life from 4:00-7:00 PM on Thursday June 30, 2022 in the Magoun-Biggins Funeral Home. A Funeral Mass will be celebrated in the Holy Family Church in Rockland at 9:00 AM on Friday July 1, 2022.