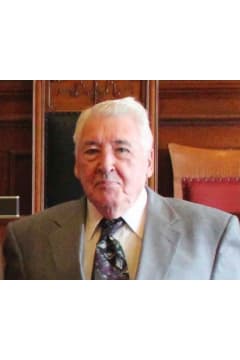 Roland Edwin Swinamer 2/21/1925-3/22/2021
Roland Edwin Swinamer of Rockland passed away on March 22 after a short illness while under the supportive care of the Pat Roche Hospice house in Hingham Ma. Son of the late Lottie and Clifford Swinamer of Halifax, Nova Scotia he immigrated with his family to the Roxbury section of Boston in 1927.
Rollie is survived by his loving wife of 73 years Shirley (Day), devoted father to his children Stephen and wife Dona of Sagamore Beach, Robert and wife Sharon of Jacksonville FL and Lori (Swinamer) Bennett and husband David of Sugar Land TX. Loving grandfather to Lisa Swinamer of Jacksonville FL and Lauren (Bennett) Obregon and husband Maio of South Hadley, MA as well as great grandfather to Logan Musgrave of Florida and Maio Obregon of MA. Rollie is also survived by sisters Helen (Swinamer) Drouin of Virginia and Sandra (Swinamer) Flemming of Halifax, Nova Scotia, Canada and many nieces and nephews. Rollie was predeceased by sisters Gwendolyn (Swinamer) Joyce of West Roxbury and Shirley (Swinamer) Walsh of Ormond Beach, FL.
After attending Boston Schools Rollie enlisted in the U.S. Army in May 1943 and upon completion of training was sent to Europe where he was a member of the 889th Air Engineering Squadron. A proud member of the "Greatest Generation" he participated in many of the key battles of WWII including the Invasion of Normandy, Battle of the Bulge and the Central European Campaign. One of his proudest memories was becoming a U.S. citizen in July 1944 at Plymouth England before going into battle.
Returning to Boston in 1945, Rollie met and wed Shirley in 1947 and started their 73-year adventure together. They moved to Dorchester in 1953 and after having 3 children moved to Rockland in 1964. A 31-year career with Boston Edison led to a 41-year retirement and golf became his pastime. Rollie fondly appreciated the many friends he came to know on and off the course and many rounds with the "Hackers" league at Ridders Golf Course. If you asked, he got a 4! He was also a long-time member of Healthtrax Gym in Hanover.
The family would like to acknowledge the wonderful friendship and support that Rollie and Shirley's many neighbors provided over the years. Thank you Tony, Sandy, Rich and Barbara, Mike and Jen. Also, the compassionate care and support provided by Norwell VNA/Hospice and the Pat Roche Hospice House of Hingham. In lieu of flowers please consider a donation to one of the above organizations.

There will be no visitation or memorial service per Roland's wishes. Roland will be interred at the National Cemetery in Bourne, Ma at a later date.

Words cannot describe how sorry I am for your loss. Rollie was such an incredible person, I have so many great memories! Please know that you are all in my prayers and as you go through this difficult time, remember that you are all so loved.
- Rosie Schipper
Shirley, Lori, and all the family, our thoughts are with you all. We were so sorry to hear about Rollie's passing. We remember him as a strong and happy man, always smiling and full of piss and vinegar to the very end. We have fond memories of laughing with him and Shirley in Houston at El Tiempo and in Rockland at their home and won't ever forget his approach to life...stay young at heart and carry on. To one of the nicest men we have ever had the pleasure of spending time with, we will miss you❤ Pat and Terry Butler Kingston Ontario Canada.
- Butlers
Just saw the news, Steve I am so sorry for your loss. Great man and a devoted golfer. I looked forward to our discussions about how Tiger Woods wasn't going to amount to anything. Rollie would say too fast and hard out of the gate to last.
- steve walsh
I loved Rollie! I used to enjoy the Swinamer family summer visits to my Nanny's in Greenfield so much. My heart goes out to Shirley and his kids and grandkids.
- Annie Emanuelli
My deepest sympathies to the Swinamer family. What a full and wonderful life your Dad had, Lori. May he Rest In Peace.
- Linda Griffiths
He was a great man and will be truly missed. Rest easy "Uncle" Rollie.
- Mark Driscoll
Rollie was an American hero, and in many ways lived the American Dream. He made the most of the time he had after retirement, and played golf for almost 40 years even though he only started after retiring. He was the rock of the family, and will be missed by everyone. RIP
- David Bennett
It was very sad to hear of Rolands passing. Roland brightened everyone's day when he walked through the doors at Healthtrax in Hanover. We will miss him!
- Tom Whalen
To the Swinamer family, I was shocked and saddened to hear about the loss of your Husband and Father. I (so) looked forward to seeing his return to the gym during or after this pandemic and wondered when he would be back. We formed a friendship several years ago along with many other members who were in the gym during the same time as Rollie. We talked quite a bit each time we were in the gym together. He talked lovingly about his family and golf. He was always wearing a smile and sincerely cared about what was going on in everyone's life. I used to tease him by telling him he exercised his jaw more than any other part of his body and he agreed! He'd have a good laugh! Not (at all) surprised that he was part of the Greatest Generation. A wonderful man who lived a wonderful long and healthy life. I feel blessed to have been touched by him and will always have warm memories of him. He will be sorely missed. My thoughts and prayers are with all of you. Sincerely, Lori Hayes (A friend and fellow member at Healthtrax)
- Lori Hayes
friday friday so sorry to hear of the loss of your husband may all the memories you have shared through the years help you with your sorrow sending hugs and prayers love Barbara Umbrianna
- Barbara umbrianna Umbrianna
To the Swinnimer family, I am saddened to hear of Rollie's passing. I knew him from our golf league at Ridder and will say that I enjoyed not only playing with him but just seeing him every week. He was always positive and smiling as if he enjoyed everything life offered as a gift.
My sincere condolences on the loss of your father & husband. God bless you all
- Jack Feeney
To the Swinnimer family,
I was so sorry to hear about Rollie. Words can not say enough at times like this.
My prayers are with you Shirley and your family.