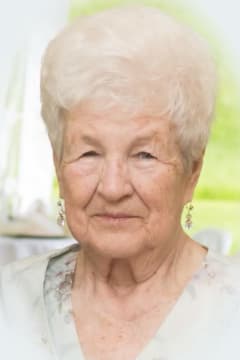 Anne Oberle, 97, of Scituate, MA, formerly of Revere, passed away peacefully at home on June 5, 2022 surrounded by her loving family after a brief illness.

Born on December 10, 1924 in Poland, she was the daughter of the late Maxym and Mary Stashewsky. At a young age, Anne immigrated to Winnipeg, Manitoba with her family and then later to Boston, Massachusetts.

Anne married her husband, Gerhard, in 1946 and they eventually settled in Revere, MA where they raised their family. She worked in the check processing clerical department for the Bank of New England in Boston and enjoyed many years of retirement.

She will be reunited in heaven with her late husband of 60 years, Gerhard “Gerry” Oberle Sr., her son Gerhard “Gary” Oberle Jr., and her grandsons Gerhard “Greg” Oberle III, and Daniel Oberle. She is also predeceased by her siblings Victor Stashewksy, John Stashewksy, and Jean (Stashewksy) Boyd.

She is survived by her son, Edward Oberle and his wife Rosann of Columbus, Ohio, daughter Stella Filonowicz of Mansfield, and daughter-in-law Donna Oberle of Northampton; her grandchildren, Christina, Peter, Julianne, Edward Jr., Kaitlyn, Joseph, Jennifer, and James; and great-grandchildren, Stephanie, Olivia, Audrey, Vera, Owen, Amelia, Lydon, and Henry. She also was loved and cared for by many nieces, nephews, and extended family, especially Jimmy, Cathy, Jim, Janet, Geraldine, and Louise.

Anne’s great pleasures in life were centered around her family, showing her love through cooking and crocheting. She took tremendous pride in making her signature Polish food for family and friends (gołąbkis, pierogis, borscht, and potato pancakes to name a few), always making sure everyone had leftovers to enjoy at home. She never missed a Red Sox game, loved the smell of the ocean air, and looked forward to any and all shopping trips, especially to the Market Basket. Anne remained active her entire life, walking along Revere Beach for over 5 miles a day well into her 80’s and having returned from a 7 day Caribbean cruise just one month ago.

Above all else, she will be remembered as a loving and devoted wife, mother, Grandma, Mammy, aunt, sister, and friend who will be greatly missed by all who were blessed to know her.

A Funeral Mass will be celebrated at Holy Apostles Parish (formerly St. Joseph the Worker Church), 1 Maquan St. Rte. 14, Hanson, on Friday, June 24th at 11am. Followed by a graveside service at Fern Hill Cemetery in Hanson for the interment of both Anne and her husband, Gerhard, with military honors for his service in the USMC during World War II.

In lieu of flowers, the family requests donations be made in Anne’s honor to:
The Red Sox Foundation Inc.
P.O. Box 411217
Boston, MA 02241
www.redsoxfoundation.org